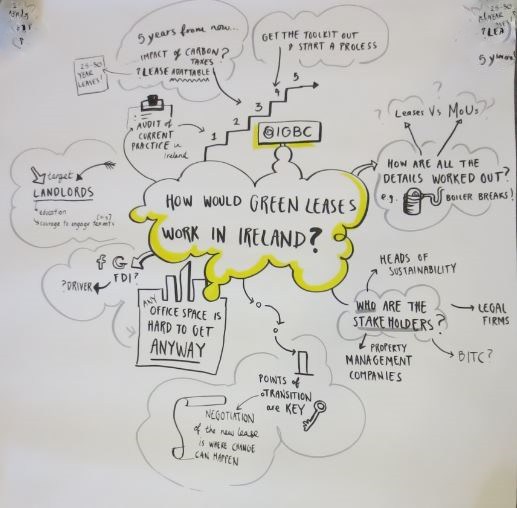 The Irish Green Building Council and the Society of Chartered Surveyors Ireland are working together to develop an effective tenant/landlord strategy for energy efficiency in commercial buildings.

In Ireland, the commercial and industrial sectors combined account for close to 30% of total final energy consumption and comprise a heterogeneous mix of organisations, both in terms of activities and scale. Generally speaking, Ireland has a relatively unsophisticated commercial buildings stock, and a high incidence of buildings in which relatively basic upgrades could lead to significant energy savings (SEAI, 2015).

Against this background, the Irish Green Building Council (IGBC), in conjunction with the Department of Communications, Climate Action and Environment, organised a workshop on large scale deep renovation in the commercial building sector in Google European Headquarter in April 2016. As the conflict between landlords and tenants stemming from “split incentives” to install upgrades had been previously identified as one of the top barriers to capturing energy savings in commercial buildings, Katy Janda from Oxford University was invited to present on her research on green leases. A green lease is a lease agreement which is intended to ensure that a leased property is used and managed in a manner which fosters sustainability. Green Leases are a tool for engagement between landlords and tenants to facilitate the better sharing of data on the operation of the building.

Awareness of the concept in Ireland is limited. In fact, use of these clauses has been driven mainly by international tenants locating in new office buildings who are familiar with and support the concept. However, as participants’ response on the day was extremely positive, follow-up events with Chris Botten from the Better Buildings Partnership and Ann Marie Aguilar from the Better Places for People Campaign were subsequently organised. The discussion has been joined by over 60 experts to-date, including facility managers, property owners, construction professionals and non-domestic building users. Together they agreed that green leases could help incentivise both parties to make the leap to better management and operation of the commercial building stock, and that existing tools needed to be adapted to the Irish context.

Based on these findings, the Irish Green Building Council and the Society of Chartered Surveyors Ireland are now working together to propose a series of clauses that would be suitable for use in Irish leases for different building types, uses and owner profiles.