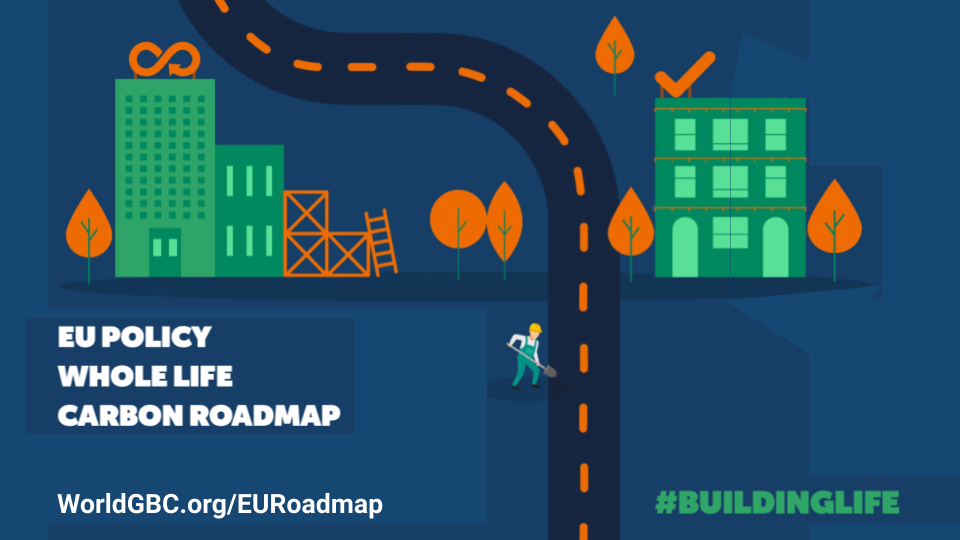 The World Green Building Council (WorldGBC) has today launched a bold new policy plan for the European Union to accelerate progress on decarbonising buildings and construction, one of the most heavily emitting sectors in the world.

Developed with the support of a coalition of over 35 leading industry bodies through WorldGBC’s flagship #BuildingLife project, the EU Policy Roadmap is the first of its kind at EU scale to address the whole life carbon impact of the built environment, across multiple policy routes.

The roadmap will be launched at a conference on Tuesday 24 May 2022, attended by EU policymakers and representatives from across the built environment sector. Ciaran Cuffe, MEP (Greens), who is the Rapporteur for the current revision of the Energy Performance of Buildings Directive, will deliver a keynote reacting to the roadmap and the key role of buildings in tackling climate change. A panel debate will follow, between senior industry and public sector figures.

The roadmap proposes a timeline of recommended actions for EU policymakers to accelerate the decarbonisation of buildings by 2050, tackling both CO2 emissions from their operation, and the long-overlooked impact of emissions from materials and construction.
Much of Europe’s building stock is old and inefficient and the European Commission has acknowledged that renovation rates must at least double. The roadmap highlights the urgent need for more ambitious policy and financial support to enable energy efficient property upgrades.

Alongside this, buildings are still being constructed using carbon-intensive materials and processes, which sustains the high embodied carbon impact of the sector. That’s why the roadmap makes a series of recommendations on how EU policy can enforce the calculation and regulation of emissions across the whole life cycle of a building, as well as measures that will improve the circularity of building materials.

A failure to address this whole life carbon impact of buildings will likely mean the decimation of Europe and Ireland’s remaining carbon budget, putting the EU Green Deal’s target of climate neutrality by 2050 well beyond reach.

The roadmap’s recommendations were developed with input from major business networks and industry associations, as well as environmental NGOs and city networks. They include milestones on how key EU policies and regulations affecting the building and construction sector should be tightened over time.

The EU roadmap complements the draft recommendations to decarbonise Ireland’s built environment released by the Irish Green Building Council (IGBC) on 6th May. The report published by the IGBC shows that construction and the built environment are directly responsible for 37% of Ireland’s emissions, the same as agriculture. This is made up of about 23% operational emissions associated with the energy we use to heat, cool, and light our buildings. A further 14% of the emissions are embodied carbon emissions from the production of construction materials, transport of materials, construction process, maintenance, repair and disposal of buildings and infrastructure.
The full EU roadmap can be downloaded here.

Cristina Gamboa, CEO, WorldGBC: “Europe’s built environment is responsible for over a third of the region’s carbon emissions. Eliminating these emissions means we are fully tackling both the energy efficiency of the buildings themselves and decarbonising the many material supply chains that the sector relies upon.
“We are grateful for the strong support shown by so many leading organisations for the recommendations in this roadmap and we are calling on the European Commission, Parliament and Council to take note – and take action. The safe and sustainable future of Europe depends upon it.” 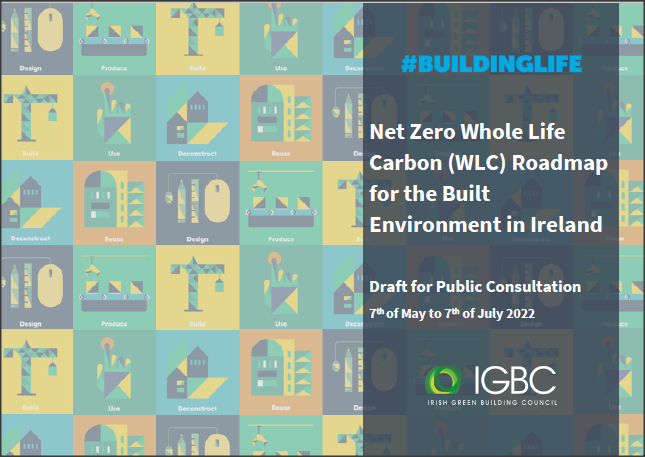 Reacting to the news, Pat Barry, CEO at IGBC said: “To successfully decarbonise Europe’s built environment, every country will have to be fully engaged in the process. The Irish construction sector is responsible for 37% of our country’s emissions, the same as agriculture. To address this, we recently launched our draft national roadmap to decarbonise Ireland’s built environment which lays out the necessary steps for the industry and government to halve the emissions by 2030. The final roadmap will be launched in September, and we are now inviting all key stakeholders to take part in the public consultation”

The draft national roadmap for Ireland was developed by the Irish Green Building Council in close cooperation with industry and key stakeholders as part of the #BuildingLife Campaign. It is available here and opens for public consultation till July, 7th 2022.