In January 2019, the IGBC, in conjunction with the Department of Culture, Heritage and the Gaeltacht, Carrig and Lincoln University, organised two workshops to discuss the potential impacts of climate change on Ireland’s built and archaeological heritage, and prioritise the short- and long-term adaptation actions needed.

Following a series of presentations, workshop participants were asked to express their concerns in relation to the impacts of climate change on the built and/or archaeological heritage, and to discuss what is required to better protect this heritage. 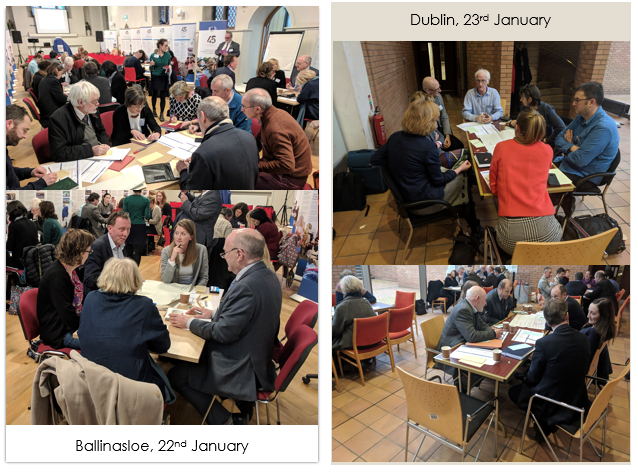 Workshop participants highlighted that most of Ireland’s built and archaeological heritage is located in low-lying areas on the coasts, and is hence extremely vulnerable to the impacts of climate change. Unsurprisingly, the impacts of extreme events – torrential rains, increased flooding, stronger storms, and enhanced rates of coastal erosion were of most concern to them.

Workshop participants were also concerned about the impact of “poorly considered and implemented” deep retrofit of historic buildings, and by the impact of “ill informed and ill conceived” flood defences.

Other key sources of concern included increase in relative humidity and temperatures, leading to faster plant and mould growth, and in creased or new pest infestation, which could, damage historic buildings.

Interestingly, many workshop participants said that they were mainly concerned by the combination and interaction of these impacts.

A number of actions were suggested to better protect Ireland’s built and archaeological heritage, including:

A copy of the reports can be downloaded here:

The feedback collected from the workshops will directly inform the development of the sectoral plan. The draft plan will be widely circulated through a public consultation scheduled for May 2019.

For further information on this project, please contact Marion.