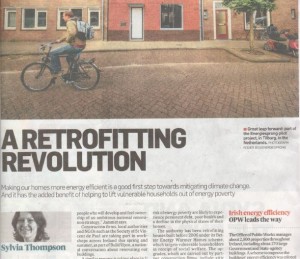 Making our homes more energy efficient is a good first step towards mitigating climate change. It also helps to lift vulnerable households out of energy poverty.

Upgrading our homes and offices so that they use less energy is one of the most cost-effective ways to reduce greenhouse-gas emissions, but in Ireland only a tiny percentage of buildings have been retrofitted with enough insulation to save significant money and energy.
Doing so wouldn’t just be a good first step to mitigating climate change: it would also improve life for people who currently live in energy poverty, which is to say are unable to afford the electricity, oil or gas they’d need to maintain a comfortable living environment. Besides its economic and environmental benefits, retrofitting a home improves its air quality and the health and wellbeing of its occupants, according to Marion Jammet of the Irish Green Building Council.
Time is pressing: every EU country must have a national renovation strategies by April 30th, 2017, under revisions to the EU energy-efficiency directive in September this year. Residential buildings account for 27 per cent of Ireland’s total energy use and 12 per cent of carbon emissions. The EU wants to improve energy efficiency by 27 per cent by 2030.
Ireland previously set out a renovation strategy in 2014, but it was widely regarded as a rushed document with little practical application. “There was very little consultation and no specific targets for each sector,” Jammet says.
The Irish Green Building Council has been given the job of consulting all relevant groups. It is talking to the construction industry, non-governmental organisations, banks and others to work out how best to make this strategy practical.
“We are building a community of people who will develop and feel ownership of an ambitious national renovation strategy,” Jammet says. 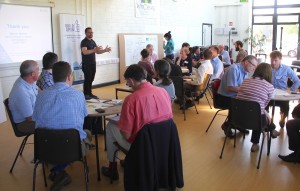 Construction firms, local authorities and NGOs such as the Society of St Vincent de Paul are taking part in workshops across Ireland this spring and summer, as part of Build Upon, a national conversation about renovating our buildings.
A similar process is taking place in 11 other European countries (buildupon.eu). The aim is to create a “renovation revolution” across Europe by establishing renovation strategies that bring together trained construction workers with banks and customers keen to retrofit their buildings.

Picture above: expert stakeholders discussing retrofit in CloughJordan, Co. Tipperary.
John-Mark McCafferty, head of social justice at St Vincent de Paul, attended a Build Upon workshop in Dublin. “A renovation strategy is vital, because many of the people we visit and help are in cold homes. Many families struggle to heat their house because of poor energy-efficiency standards.
“This means respiratory infections, children going without warmth, impacts on mental health, and mothers choosing between heating and eating. Much of this is in the private rented sector, where tenants are already under pressure with rising rents. Renovating houses means warmer homes. Warmer homes means healthier and better lives. It’s that simple.”
The Sustainable Energy Authority of Ireland says that households in or at risk of energy poverty are likely to experience persistent debt, poor health and a decline in the physical states of their homes.
The authority has been retrofitting houses built before 2006 under its Better Energy Warmer Homes scheme, which targets vulnerable householders in receipt of social welfare. The upgrades, which are carried out by partner construction firms, include attic insulation, draughtproofing, lagging for hot-water tanks, and cavity wall insulation. More than 25,000 homes have been treated so far.
Others schemes, such as Super Homes (superhomes.ie), run by the Tipperary Energy Agency on behalf of the authority, are targeting the private sector for energy upgrades.
Paul Kenny, the chief executive of Tipperary Energy Agency, spoke at a Build Upon workshop in Tipperary this week. “People need to think of this deep renovation in the same way as they think about buying a new car. It costs about €28,000 – which includes an A3 energy rating and a renewable-energy heating system. It’s an investment in comfort. People will have a home that is green and high performance, with a steady level of heat,” he says.
A Dutch initiative could be a model for future projects. “People feel that retrofitting their homes will be disruptive and will take a long time, but the Dutch project Energiesprong” – energiesprong.nl/transitionzero – “shows how it can be done in 10 days,” says Jammet. Energiesprong (its name means Energy Leap), which now operates in the UK as well as the Netherlands, has renovated more than 10,000 houses so thoroughly that they no longer have energy bills.
If Ireland wants to meet the 2050 climate-change targets, Jammet says, “we would need to deep-retrofit to A2 levels 75 per cent of the existing residential housing stock”. Getting banks involved in financing green mortgages will be key to developing any model on a large scale. “In Ireland we are still trying to get the financial sector involved, but research has shown that the risk of default is lower on mortgages on energy-efficient homes.”
Irish energy efficiency: OPW leads the way
The Office of Public Works manages about 2,500 properties throughout Ireland, including about 270 large Government and State-agency buildings. A scheme to improve the buildings’ energy efficiency was piloted in 2007.
The pilot scheme discovered that almost two-thirds of the energy used in its buildings was down to lights, computers and other appliances. “We also discovered that 35 per cent of electrical energy use was at night and 20 per cent was at weekends, so 55 per cent of electricity was being used when no one was in the building at all,” says Conor Clarke the head of the energy-conservation unit at the OPW.
A simple message was introduced: switch it off – and if it can’t be switched off, turn it off as soon as possible. The pilot scheme cut energy use by almost 20 per cent.
In 2008 the OPW introduced a scheme called Optimising Power @ Work – or OP@W – at 250 large buildings. Energy-logging equipment was installed in each building, an energy officer was appointed to be the key contact person, to drive the campaign, and energy specialists gave advice to the energy teams.
“We realised that behaviour change, such as switching off computers, collapses after the initial buzz, so we need to constantly reinforce messages via specialist expertise and energy officers throughout buildings,” says Clarke. A national awards programme, with energy-awareness days, also helped to motivate staff.
Six years into the programme, its €1 million budget has turned into almost €5 million in energy savings, cutting 20 per cent off its bills.
In 2014 the programme was rolled out to hospitals, prisons, third-level colleges and local-authority headquarters. “Initial indicators are that savings will be in line with those achieved in the central Government buildings,” says Clarke.