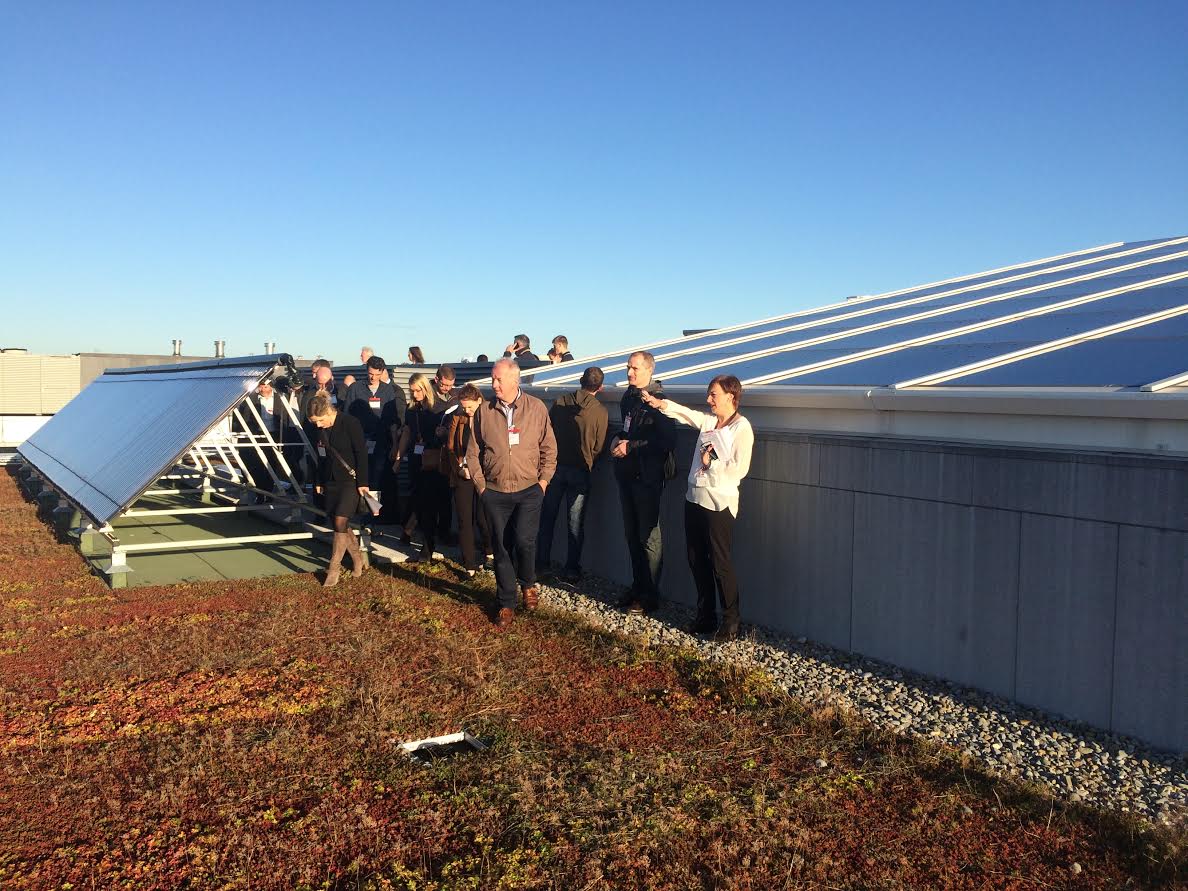 Last week, the Irish Green Building Council (IGBC) took part in the seventh annual World Green Building Week, coordinating five events across the country. Events included tours of some of Ireland’s most sustainable buildings (1 Albert Quay in Cork and Block B in East Point, Dublin) and of the recently refurbished National Gallery, as well as conferences and workshops.

The IGBC would like to thank all its members that contributed to the success of that week: Arup, BDP, Cundall, Ecological Building Systems, Green REIT, Henry J. Lyons, Mac Interiors and PM Group.

Cundall held a well-attended event on Health Buildings in Healthy cities. This looked at the importance of health and wellbeing including the application of the Well certification to their own offices. A key theme was the need for sustainability to go hand in hand with health and wellbeing, as overly focusing on internal environment could increase carbon emissions.

There was a great turn out for the retrofit of the National Gallery from a broad range of background. The tour was led by Architect Roisin Heneghan of Heneghan Peng architects, and Chris Croly of BDP. The visit started in the spacious new plantroom located beneath the front lawn. This showed admirable strategic planning, in the number of combined technologies, ice bank storage and CHP that allowed for both future expansion and for the decarbonisation of the electrical grid. This was followed by a tour of the main spaces showing the challenges of fitting 21st century highly efficient environmental services to a 19th century building, without compromising the original features. This included innovations such as an all glass return air plenum to avoid casting a shadow across the 19th century gallery roof light. The fit out sees the opening up of previously concealed windows, and also a new courtyard, enabling visitors to more easily find their way around the gallery. The upgrading of humidity controls and ventilation seeks to preserve the paintings for future generations.

Thirty-five senior representatives from the public and private sectors, NGOs and academia met on Thursday in the International Energy Research Centre (IERC), Cork to design an impactful national renovation strategy V.2 for Ireland. In particular, participants explored the 10 actions listed in the “Declaration in 10 points for a better national renovation strategy and an effective implementation plan“, as well as opportunities and challenges around them. The workshop was organised as part of the Build Upon project and opened by Tony Day, Director, IERC. A workshop report will be available soon here.

Cloud computing giant Oracle, achieved LEED Platinum certification with their recent fit out of Oracle Block B in East Point Business Park.  The project, which won the Green Project of the Year Award at the 2016 Irish Construction Industry Awards, was designed by Meehan Associate Architects with Mac Interiors as the contractors. Oracle operate in a highly competitive recruitment market, so in order to attract the right people to work with them they have designed a state of the art workplace created to be a futuristic, flexible and adaptable space, with energy reduction at the heart of its transformation.

The tour, with over 20 participants, was led by Penny Linton of Meehan Associates and Tiffany Quinn of Mac Interiors with a presentation from Alan Lawless of Oracle. The tour covered three floors, including the roof and concluded in the command hub where the team answered questions from the group.

The tour started on the top floor of 1 Albert Quay where the thirty-six participants enjoyed a breath-taking views of the River Lee and City Centre area. One Albert Quay is designed to Gold LEED standards and is the most significant new office development in Cork City Centre in many years.

The site visit concluded with a tour of Tyco and Arup offices, where participants had the opportunity to look at the offices fit out.